Congratulations to Nathanael and Josh who has been invited to join the u14’s & u9’s Somerset County Team to play at the upcoming West of England and South Wales County Team Championships in Chepstow. 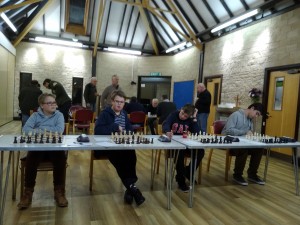 Tonight we held a special simultaneous challenge for the junior members of the club against Chris Greenaway. It was also a chance for Chris to see how they play before he starts to help them improve their game.  We are excited to see how these juniors develop their chess game over the coming months. 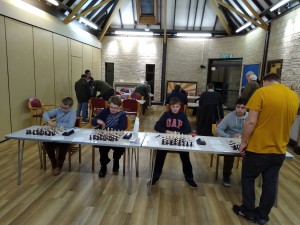 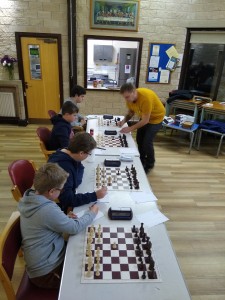 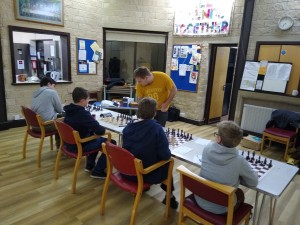 Well, we got there eventually. There was a lot of traffic on the A370 into Weston; probably carnival traffic parking up for the next day we were told.

Arnold had kindly agreed to be our top board and he was evenly matched with Ollie Isaac. David (100) was playing Malcolm Dinham (106) so fairly even there too. Both Mike Ward and Vic were outgraded by 20 points or so (against John Parsons and A Keen) but I was quietly confident. Last year we came away with a victory against similar grades.

David finished first; an absolute disaster. How can anyone allow an h7 mate after 17 moves. Well you’re just going to have to guess because I’m too embarrassed to put the game up on the website.

Mike succumbed to a mass of pawns (and pieces) bearing down on his King which had nowhere to go but into danger.

Vic looked to have a reasonable chance and his opponent’s King was well exposed, but after Queens were exchanged he was playing with 2 Rooks against 2 Rooks and a Knight. And then that nasty Knight was threatening to fork Rooks and the King and he bravely capitulated.

Arnold finished last and it was an evenly and fiercely fought contest. It eventually came down to a Rook and pawn ending, an isolated white pawn on a5 which black had to defend with his Rook allowing Arnold to win a pawn on the other side of the board and leaving him, eventually, with King and Pawn against King. No slipping up and allowing a stalemate and Black resigned. Well played, Arnold.

A disappointing 3-1 loss. Damp squibs and other firework metaphors are wholly inappropriate. Hope springs eternal though, so we’re back in December against Wellington.

Wells had postponed our original scheduled meeting as they had a few players off sick. They emailed me details of their likely team but when they turned up on Tuesday last the composition of their team was different. Conspiracy theorists suspected an attempt to make us field a weaker team but I had already decided on the team anyway. I innocently believed their excuse.

A full house at the club with a new junior meant that we started a little late as I had to call for silence.

Off we went. I think Mike Ward finished first, falling to a Knight smothered mate in the corner. Surely he’s old  and ugly enough not to fall prey to that sort of checkmate, I hear you say. Sadly no. 0-1.

Phil finished next and lost reasonably quickly. His believable excuse was that he had been having exhaust problems on his car and was thinking more about the return journey to Minehead than the really important matter at hand. 0-2.

David was next to finish playing White. His queen got chased round a bit, his King got out of position and didn’t castle. Queens were exchanged, and rooks, and pawns. With 4 pawns and a rook each left, a draw was agreed. Well done David for not losing on time this week. 1/2 – 2 1/2.

Jerry, playing black and I think he said an advanced French, seemed to be a bit cramped but with Rooks bearing down on the King side with White’s King well advanced. After the King retreated to safety neither player seemed to be able to or want to risk making a breakthrough and potentially weakening their position so a draw was agreed. 1-3.

A fair result but a bit disappointing. I think we could have done better. Maybe next time.

The first of the matches between the two Taunton teams took place on Tuesday 22nd Oct. As usual the Knights outgraded the Bishops but the Bishops were quietly confident, a bit like Wales against South Africa in the Rugby world cup. And so it was.

The only win from the Bishops was Jerry against Chris. Phil seemed to be alright against Arnold but more pawns won the day. Vic McAndrew played a blinder against Martyn (grades 78 v 119) but unfortunately Martyn wriggled his way out of defeat with a (sneaky) perpetual check.

David was in a strong position against Stan but didn’t pick the right moves to force a win. And then lost on time (again).

I don’t think White ever got going

The first of the Somerset Junior Grand Prix started today at Prior Park College in Bath, a very grand venue with an amazing view. 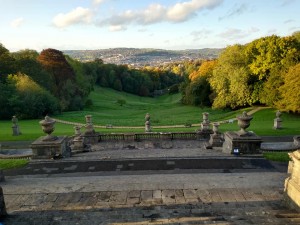 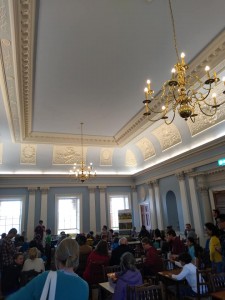 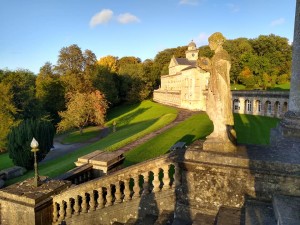 This time we had 4 juniors taking part, Nathanael, Harvey, Joshua & also Ryan (one of our future juniors).

Nathanael has now moved up from the u12’s to u16’s which is quite a jump when you are 12.  Today there were only 6 of them in his age group so they all got to play each other.  He had many challenging and long games.  He finally came out with 1.5 points.

This was Harvey’s first tournament and as he’s only been playing for 3 months he was very brave to give the tournament a try.  Even though he didn’t come out with a win this time he definitely gave each of his opponents a run for their money by keeping them playing for quite a while, a great achievement for a beginner.  We look forward to seeing how he progresses as he learns more at the club.  Welcome onboard Harvey!

Joshua, our little rising star, at age 5 was also attending his first tournament.  He was placed in the u7/u8 group and seemed to end up playing the u8’s most of the time.  This didn’t matter as he was able to clock up 4 wins out of 6!!!  It was all down to the last game  and fortunately his main contender lost his last game which placed Josh as joint winner of the u7’s group.  What a great achievement at such a young age.  I think Arnold (Dad) is going to have to do some DIY and put up a shelf in his room as I feel we are going to see many more trophies coming his way!

Ryan another new promising junior is not really known to anybody in the club yet.  He is currently waiting for our junior side to start up at the club so he decided to join us at the tournament and it was good to meet him and for us to get to know his family,  Ryan, taught solely by a computer so far, put up some good games for his first tournament in the u8’s.  He came out with 4 wins (one loss against Joshua!) and was awarded the runner up trophy. 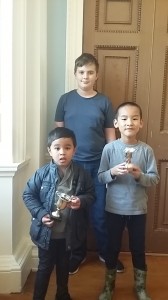 So all in all it was quite a successful day and it was lovely to have a team going from Taunton Chess Club.

The next tournament is at Bristol Grammar School on the 10th November 2019.  Make sure you are signed up to the Somerset Junior Chess Grand Prix newsletter to receive your entry form link.

We are playing at home on Tuesday 8th Oct against Wells.

Team is as follows: