Last night we saw our series of Summer friendly matches against Wellington come to an end. Here is the report that will appear in the Wellington Newspaper:

Wellington hosted Taunton for the fourth and final match in their series of summer friendly matches between the club’s. The final match was meant to be the decider with each club having achieved one win, one loss and one draw and they still finished level overall after a close fought final match. Wellington gave a debut to Gregor Fotheringham from Tiverton who will be able to play at Wellington on a fairly regular basis when his commitments to Tiverton allow.

Wellington also gave a debut to Patryk Adamiec, younger brother of Adrian who is now a seasoned match player. Debutant’s nerves got the better of Patryk who played well until a blunder put him in difficulties against Taunton’s Nathanael Tretheway from which he could not recover. Wellington soon fought back and Alan Brinkley levelled the match with a quick win. 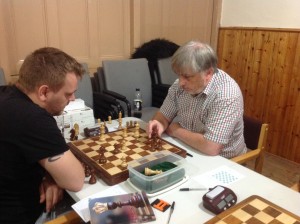 Wellington fell behind when Robert Harris made a big blunder in his match against Vic McAndrew who then maintained his advantage and never put a foot wrong as he wrapped up an easy win. Wellington pulled level with a win from Gregor Fotheringham on top board against Chris Greenaway, the British Champion in the under 120 grading class. Gregor played a thoughtful game using up much more of the time on his clock than his opponent to come out on top.

Wellington then took a good lead with two excellent wins. First, John Jeremiah beat Taunton’s Arnold Acibar who had notched up a series of Wellington scalps in the past. This was a tremendous effort by John whose attacking game put his opponent on the back foot and secured a win for Wellington. This was followed by a win for Ollie Sells against Taunton’s Michael Ward, an experienced and difficult opponent. Ollie played patiently and got on top in the endgame to run out a well deserved winner.

Leading 4-2 Wellington needed a draw from either Adrian Adamiec or Rupert Sells to win the overall match and, with it, the series. Rupert was a rook for a bishop down against Mike Watson but the board was open and both players had attacking chances. It was the Taunton man who made the most of his chances to win by checkmate. Adrian was three pawns down against Steven Smith but missed a chance to win a piece after which he was unable to stop his opponent promoting one of his pawns to clinch the match.

This meant that the match was tied 4-4 but both clubs benefited from being able to give their lower graded players and juniors match experience which is likely to be repeated next year.

Last night was the third of our series of matches against Wellington.  Here is the report that will appear in the Wellington Newspaper:

Wellington chess club hosted Taunton for the third of their summer friendly matches last Wednesday. These matches have been arranged to enable the players graded under 100 to have an opportunity to play competitive matches for their club as players graded under 100 are playing less frequently in league matches as standards rise.Taunton arrived with a team of seven players and Wellington tried to match them with a team of similarly graded players. Taunton included a junior player in Nathanael Tretheway and Wellington gave Jeremiah Pickard his club debut. Opposite him on board 7. Nathanael showed his greater experience of match play and ran out the winner in the first game to finish.Taunton went 2-0 ahead when Robert Harris lost against the Arnold Acibar, the highest graded player in the match, despite trying hard to match his opponent who was just too good for him. Things got worse for Wellington when Jon Kerr lost from a good position. Jon was three pawns up but failed to stop his opponent, Mike Ward,  promoting a pawn to a queen which proved to be a decisive advantage for the Taunton man.Taunton clinched the match when Vic McAndrew put them 4-0 ahead with a hard fought win against Adrian Adamiec. With the match lost  Wellington started to salvage some pride with Alan Stonebridge getting a hard fought victory against Martyn Maber after winning a rook for a bishop to give him an advantage which he built upon until his opponent resigned. Kim Sanders (pictured) then gained his second consecutive win in this series of friendlies. Kym looked well placed throughout and wrapped up his game with a neat checkmate.In the final game Wellington’s Neil Butler held a slight advantage against Ian Hardy but was short on time. With the match already in the bag for Taunton the players agreed a draw. So Taunton ran out comfortable winners by 4.5-2.5 but once again all those involved who rarely play for their clubs gained some valuable and enjoyable competitive experience.The final match takes place in late August with each club up to now having won, drawn and lost one.

Another report about the Summer Wellington match number 2 that will appear in the Wellington Newspaper:

Wellington chess club hosted local friendly rivals Taunton in the second of this summer’s series of friendly matches largely intended to give an opportunity to players graded under 100 who can’t command a place in their clubs’ league teams to gain the experience of representing their clubs in a competitive environment.

Taunton arrived with a team of seven players including one player graded over 100 and one junior. The presence of a junior player, Nathanael Tretheway, in the Taunton side provided an ideal opportunity for Wellington’s junior champion, Ethan Denslow-King (pictured) to play a representative match for the club. Ethan should have lost but courageously salvaged a draw from a lost position.

Taunton’s lowest graded players, Mike Watson, Ian Hardy and Vic McAndrew played much better than their grades would suggest and gained wins against Rupert Sells, Alan Brinkley and David Smith. These results were a setback for Wellington but wins on the top three boards would tie the match on the night.

The first of these wins came when Kym Sanders, returning to the home club after a brief absence gained a fine win against the experienced Mike Ward. Wellington narrowed the gap further when Wellington’s promising teenager, Adrian Adamiec,  defeated Steven Smith with a good mature performance. This left just one game undecided where Wellington’s John Jeremiah, unflappable as ever, was again matched against Taunton’s Chris Greenaway.

John needed to repeat his win of a month ago to tie the match and he did just that with his unorthodox but effective style of play against a talented opponent. This meant that the match was tied at 3.5-3.5, but more importantly a lot of good hard fought competitive chess was played by players who do not usually get the chance to represent their clubs.

The 5th Plymouth Rapidplay (a six-round Swiss Rapidplay) will take place on Sunday 2 December at Plymouth Chess Club, from 10am to 6:15pm.

Following the tremendous success of the last three Christmas events, Exeter Chess Club will once again be welcoming in the festive season in style on Tuesday 11 December (from 7:15pm) with a special Christmas “chess variants” blitz tournament, including prizes for the winners. Alongside all the weird and wonderful chess variants there will be Christmas crackers, Christmas snacks, and plenty of Christmassy cheer!

Once again, the venue will be Heavitree Social Club, and non-members can pay £2 on the night to play, or £5 to join the club for the year. We look forward to seeing you there!