The Club Championship is a contest which Mike Ward runs for the club. This season there was a slightly different format and all the Bishops played each other, and all the Knights played each other. The final was to be between the two top players from each group. Martin easily topped the Knights and John Wilkinson topped the Bishops. Unfortunately John couldn’t attend the final week of the season so Mike Ward decreed that the next ranking Bishop should take John’s place. David Graham was that man. A coin was tossed, Martyn called tails and David chose to play with the white pieces and then pocketed the two-headed coin! (Only joking)

In a tense game of changing fortunes, with chances for both sides David’s passed pawn was strong enough to force a win.

On the  27th of February when a small snow shower reduced attendance at the club to 5 players and Sharon, we decided to have an all play all mini tournament. Twenty minutes each.

Final result was as follows:

This year’s Major club championship is being run by Martin and already is looking a much more efficient and successful affair when compared to last year’s shambolic offering, run by, er.. , someone else…

Thus far three games have been played, these being –

Martin has contacted all involved, so please make sure you play your games on time!

“The Minor Tournament is now in its final phase with only 4 games left, and as Nigel Cottle has won all his 9 games played so far he cannot be caught by any other participant and so is the Minor Champion for 2015 (a win in his last game v Martyn will give him a 100% score).

Matt. Haines is currently in 2nd. place but has played all his games and finishes on 6.5, however Martyn Maber has 2 to play against Nigel and Ken. Overshott so a draw and a win will see him finish on 7 points and take clear second place.

Vic. McAndrew has 2 to play (Mike Ward and David Graham) and with 2 wins can draw level with Matt.haines, while David G. with 3 to play (Mike Watson, Steve Smith and Vic.) can also finish on 6.5 with 3 wins.

Stephen Downes after a promising start with 5 wins from his first 5 games and looking to challenge for a good finish, lost 4 and drew 1 of his last 5 games finishing on 5.5 points.

So to recap, the games to come are:- Martyn v Nigel, Steve v David, Vic. v Mike Ward, and David v Vic, and with the possible scenarios above should lead to some interesting games to finish the Minor Tournament.

And finally this was sent –

This from Mike Ward –

When the Minor was started in Sept. 2014 it was with 10 players which gave each player 9 games, 5 with 5 Whites and 4 Blacks with the other 5 having 4 Whites and 5 Blacks.

However when Stephen Downes (who joined the club later) came into the Minor it gave me the opportunity to even up the colours and thus giving everyone equal Whites and Blacks.

Not forgetting some of the other players ( Vic. McAndrew, Mike Ward, Mike Watson, Dave Graham) who may have something to say between now and the conclusion of the Minor.

All the games played to date in the Minor have been forwarded to the ECF for inclusion in the January Grading list. 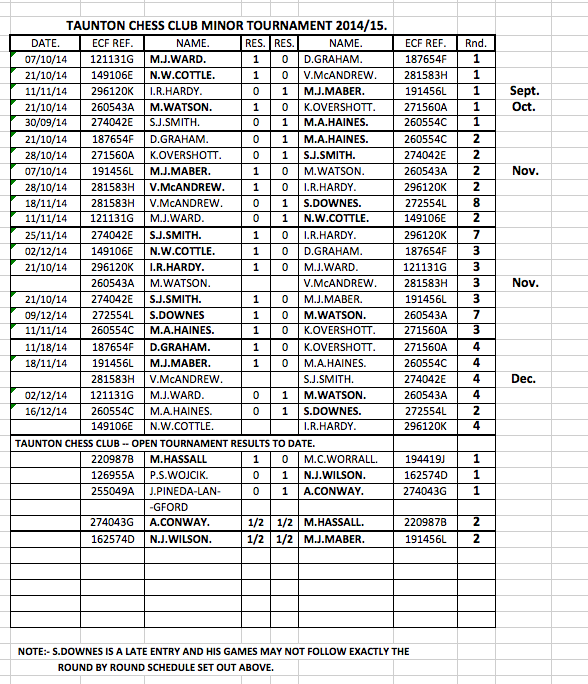 And some hot off the press results –

Hot off the press from Mike Ward (well, he emailed me at various times during the last month), we have the following results –

Extra time was allocated for round 1 to complete. The results are as below.

3 games played to date, 2 last night and one last week.

This, just in, from MikeW –

TThe Minor has finally finished after 28 games played by the remaining 8 participants after the withdrawal of John Anderson and David Graham (David’s due to the flooding of the Somerset Levels).

With the last game (SJS v KO) completed (won by K.Overshott), the winner is now confirmed as Matthew Haines after winning 2 games in a best of 3 rapid play-off v Vic McAndrew who takes clear second place.

As a result of the win by Ken. Overshott the other final places are now known as follows; Vic McAndrew (5)is runner up, Ken Overshott (4.5) is third, Stephen Downes (4) is fourth and Steve Smith (3) finishes in fifth place.

The other final scores are Mike Ward 2.5, Mike Watson and Ian Hardy both on 2.0.

All the games played in the Minor have been forwarded to Gerry Jepps (SCCA grading officer) for grading by the ECF.

There are a number of unexpected results in the tournament as will be seen from the cross table above.

One such is that of Stephen Downes (a new member this season) who is the only player to win both games against the winner and runner up! Another is that of Mike Ward who after being 2 minor pieces ahead against Steve Smith decided it would be cruel to win and conjured up a loss (much to Steves delight). In another game Vic McAndrew after being under the cosh against Ian Hardy was saved from an embarrassing loss after Ian allowed a back rank mate.

A straw poll of some of the players in the Minor has shown that they are happy to play in another similar tournament next season with maybe a few extra players to add more interest.