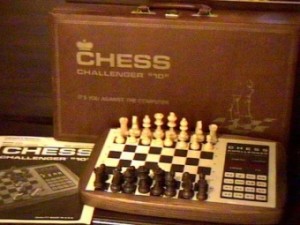 From reading all the various match reports, anyone would think pawnstar has broad interests, ranging from evaluating barmaid-hotness through to finding things to do during otherwise boring chess games.

There is in fact a further interest, one that unimaginatively combines two very, in-their-own-right, nerdy interests to make one super-nerdy interest. This being chess and computers, combined as chess computers.

Recently pawnstar was playing with the very latest (and best ever) chess computer – the Revelation II. Strangely, he didn’t choose to release any games played by him, but instead decided to pit it against the ancient Chess Challenger 10 – a very early (and feeble) chess computer from the ’70s. 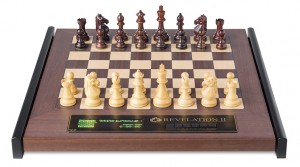 The result wasn’t pretty, with the Revelation announcing mate in 6 by move 15 – particularly impressive given the game was still in book by about move 7.