What an odd sounding title – surely the words ‘Law’ and, more distressingly, ‘Enforcement’ don’t belong on a website covering a sleepy Somerset Chess hobby. But, dear reader, yesterday marked two areas in which they came right to the forefront of our largely-elderly and sleepy chess world.

Now as you all know, pawnstar doesn’t like controversy, so the names of those involved have been shielded using the lastest 18th century encryption… 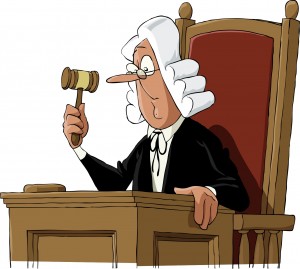 Case 1:
The judge was informed by a certain Worm Rant Liar that the team known as Greed Moos knowingly disobeyed advice given to them and fielded a team with the grading order significantly out of order. They played this against Rancid Elm Shirt, who despite beating Greed Moos, were “very aggrieved” to see the board order used.

However it was after Ton Tuna were beaten by Greed Moos that Worm Rant Liar made contact with Rent One Frog and the ruling was made – the previous encounter was nullified and must be re-played. This also means that the current situation in Idiots In Vow is on a knife edge.

Not content with just this, Rent One Frog moved on to the next business –

Case 2:
Apparently there had been trouble arranging the Hi Insider Vote match between Ton Tuna and Subtly Groan with not only a postponement, but apparently on a re-arranged night, Ton Tuna didn’t turn up. Rent One Frog contacted Jack Sit Now but had no joy and therefore awarded the match to Subtly Groan by default. It should be pointed out that Rent One Frog tried to ensure the Hi Insider Vote wasn’t decided overall by this ruling.

One thought on “Law Enforcement”