Tonight some of our players were involved in the 4th Simultaneous Challenge held at the Wellington Chess Club, it was a fun night. Here is Wellington’s club newspaper report that went into the Wellington Weekly Newspaper.

Wellington chess club held their fourth annual simultaneous challenge where the club’s top player, Alex Conway takes on all comers in separate games at the same time. Alex always wins a fair number of these games and this year was no exception. Alex had fifteen opponents ranged against him including a contingent from the Taunton club.

With Wellington’s Division 1 players giving the challenge a miss the highest graded opponent was Taunton’s Jerry Kilby who was expected to provide a tough challenge.
Six juniors were included amongst Alex’s opposition, making the most of an opportunity to get experience against a top class player.

Alex played at a remarkably fast pace playing over 200 moves in the first half an hour.
He played his usual positive game and was gaining the upper hand in most games although some were giving him a hard time. The first game was a win for Alex against one of the juniors, Isaac Pickard in 25 minutes but it was almost an hour before he notched his second win beating Ethan Denslow-King, Wellington’s junior champion.

Two more juniors fell, Malachi Pickard and Eric Wall before Alex suffered a setback losing to John Jeremiah who met Alex’s forceful play with his own attacking style. John won a piece then sacrificed it to enable him to mount an unstoppable attack on Alex’s king. Despite this setback Alex then saw off Jeremiah Pickard and agreed a draw with Robert Harris who avoided defeat against Alex in this format for the first time.

Play continued for a while before Wellington’s Jon Kerr and two of Taunton’s players Steven Smith and Vic McAndrew fell in quick succession. Then Alan Stonebridge became the second winner on the night. Alan had won two pawns and this was enough to ensure victory in the endgame. Two more wins followed for Alex one against Alan Brinkley and the other against the last surviving junior, Nathanael Tretheway from Taunton, who had been the first to fall last year. Nathanael put up a fine show this time and pushed Alex all the way.

Taunton’s Jerry Kilby had given Alex all sorts of trouble keeping the game very tight and complex. He won a piece but Alex had good chances for counterplay and a draw was agreed after some good attacking play from both players.The final match went Alex’s way where he eventually overcame David Smith who had looked to be fighting a losing battle before he eventually conceded. 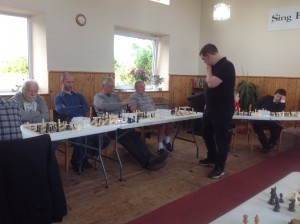 This was a fine display by Alex who finished with 11 wins, 2 draws and 2 losses against probably the toughest field ever lined up against him. Alex is pictured standing studying his game with Alan Stonebridge. The others next to Alan from the right being David Smith, Jon Kerr and Vic McAndrew.