So the Somerset Junior Chess Grand Prix begins another season, consisting of 5 games over the coming months.  This time there are some new incentives to get juniors involved with prizes for those who attend every tournament and also a new schools cup for those involved with school chess clubs. 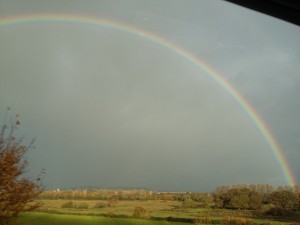 This month was another long journey with a glorious rainbow following us to the other side of Bath at St Saviours Junior School.  In the past this has been one of the hardest and most well attended tournament due to the hub of junior players in the Bath area.  This year they have changed things slightly so the u11 and u12’s were split into their separate age groups which was a lot better.  Nathanael found himself in a group of 11 x u12’s.  After arriving quite early Nathanael warmed up with a quick game against mum, needless to say he won, but there were some moves in there to make him think a little.  (Give me some credit please!!)

Game 1 was up against last years winner and very good player, Bentley.  Nathanael gave him a good game lasting 40 minutes of the 50 minutes allocated.  Unfortunately he lost but was happy as he gave him a good fight.

Game 2 was again against one of last years finalists, a mistake caused him to lose his Queen and cost Nathanael the game.

Game 6 saw a game with another of the top seeds resulting in a loss.

All in all it was a good & close performance and with a total of 3 points he came joint 3rd with 5 other players.  No medals this time as you need 3.5 points for a medal, so prizes were awarded to 1 winner and 1 runner up.  Next tournament is in High Ham on 16th December 2018.