We always kick off the season with a home match against Sedgemoor. The Chess Gods have deemed it thus. They have also deemed that we usually lose against them.

The grading limit once again is a maximum average of 145 across 6 players. So it’s out with the calculators to work out all possible combinations of players grades. Everyone’s grade, except 2 players went down this year, so it is now possible to have 2 strong players on boards 1 and 2, just. I had half expected 1 player to drop out so I arranged for 7 players to turn up and I would step out if indeed 7 did turn up.

We had 7 players in the end and Sedgemoor only had 5 with one player ‘on the way’. Their strongest player, Ben Edgell, is a very high grade (199) and I was sure wouldn’t play as it meant playing a very low grader to balance things out. Their missing player was an 85 junior which meant they came in at 142.3 average grade. Taunton was slightly higher at 143.8 average. Was their missing player a plant to allow Ben to play? Well they hinted themselves that there was some truth in it. However, thinking about it there is nothing wrong with this. After all I did just the same. I played one low graded player to allow a second strong player on board 2. Isn’t it what all division 2 captains do for every match? As long as the average is 145 or under what does it matter? 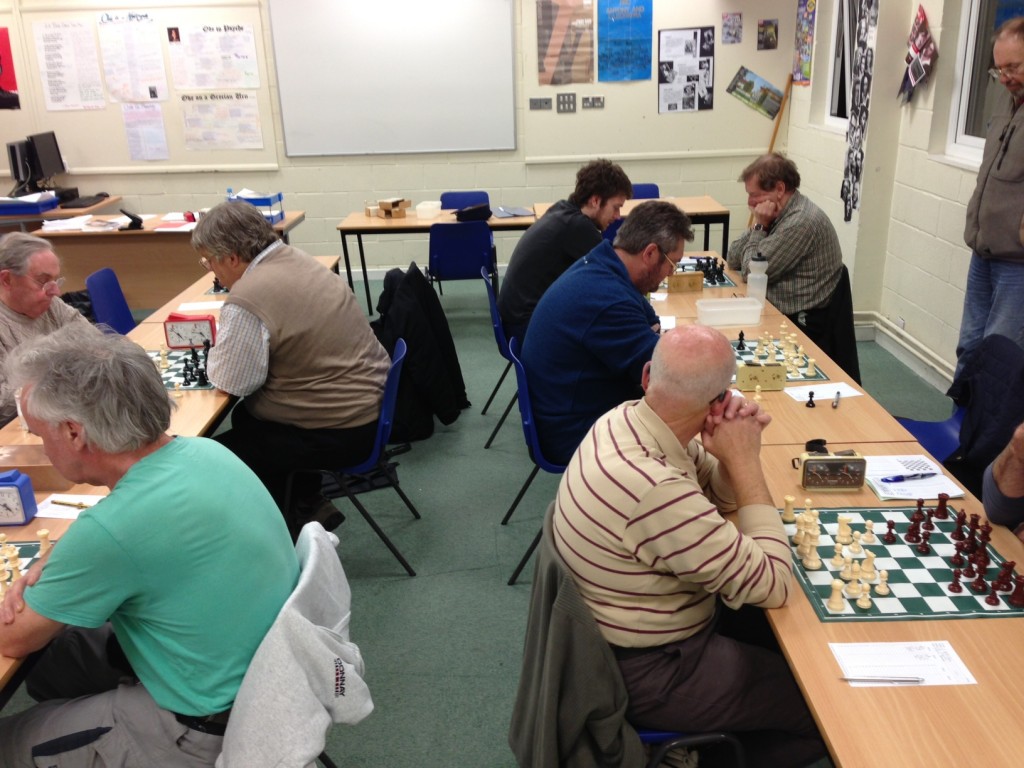 Their missing player never showed up so Vic McAndrew had a 1-0 default win.

Robin overcame Stan Hill who put up a good fight. I think Robin was under pressure for much of the game but wriggled out of it with an outside pawn up. Stan had given up his last piece to stop it queening which gave Robin a routine win. This looked like a good tussle which I think both players enjoyed. Taunton 2-0 up.

Jerry and Steve Green played a bit of a crazy game. Steve always plays very off beat openings which gets everyone out of book within a few moves. Jerry seemed to have all the pressure and controlled the centre with queen and rooks bearing down on Steve’s uncastled king. Somehow Steve untangled his position by pushing his black pawn up to h2 with check (!) and came out a pawn up and 2 rooks each. After some subtle king and rook shuffling they agreed a draw with a probable repetitive check looming.

Nick (white) played a version of the Blackmar Gambit and had a great tactical tussle with Neville Senior. I saw it at one point where Nick had a piece for 3 pawns. Neville always defends very well and is difficult to break down. His pawns were pushing dangerously forward in the centre but Nick’s queen moved down the long diagonal to a8 and checked black’s king on the back rank. Repetitive check followed, therefore a draw, but even here one slip from Neville by trying to run his king away would have ended in mate.

Stan’s game against Chris McKinley was pretty even and very clogged up. After 2 hours no pawns had been taken and just a few pieces. Most of the pawns were zigzagging across the centre of the board leaving very few open lines for break throughs. I can only assume there was a slip from Stan as Chris had the initiative next time I looked and Stan had the worst of it for much of the last hour. Myself and a couple of others thought Stan may well lose it, but to his credit he hung on in a 2 rooks and 6 pawns each endgame and played very accurately to hold the cramped position. Well played Stan Draw.Taunton 3.5 1.5 up.

What a game on board 1 between Ben Edgell and Terry. Too much to talk about here but a very dramatic finish. Terry, playing black, had 3 (yes 3) connected passed pawns in whites half of the board and was edging them forward while blockading white’s only isolated advanced pawn. Terry’s 2 bishops were more powerful than Ben’s 2 Rooks and given enough thinking time Black would surely Queen a pawn and wrap things up, but time was against both players and one slip from Terry with only a couple of minutes to go, and one quick Queen move from Ben to fork blacks King and Bishop and blacks position fell apart. This was a real shame as Terry out manoeuvred Ben to set up a virtually won position. Of course time is part of the game for both players but in this case it seems very cruel. Afterwards Ben commented how he felt he had used up a whole season of luck in one game. Terry should take a lot of heart from the game though. To be in such a position to a 199 player with black deserves huge credit. At least the match result wasn’t riding on this result.

So, of the games played on the night it was 2.5 each, but the default win swung it Taunton’s way. (We lost a match last season in this same manner)
I hope we haven’t displeased the Chess Gods with this result by upsetting the natural order of the universe.
It’s played one, won one. All we have to do now is win all the games for the rest of the season and we win the second division. How difficult can it be?!
A big thanks to everyone who played, I hope we can put out a team just as strong in as many up-coming matches as possible.
Next match: Monday 22nd October. Away at Glastonbury.
Martin. Division 2 captain