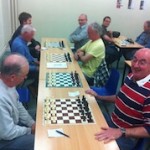 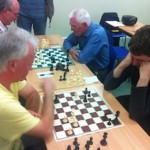 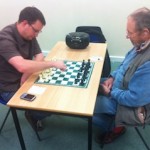 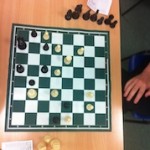 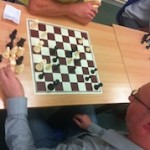 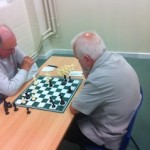 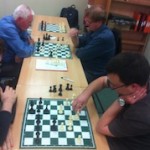 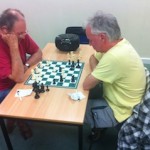 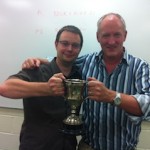 The event was based around a 10-second buzzer system whereby moves have to be made as the buzzer sounds. It is unexpectedly frustrating/challenging as frequently you either want to move faster (in the case of obvious moves) or slower (when complex positions arise). A further factor is that the pre-recorded buzzes run out (intentionally I assume?) after 36 moves, and games need to be adjudicated at that point.

Scoring favours quick wins, with 3 points for a win within 36 moves, 2 points for an adjudicated win, 1 point for a draw and 0 points for any loss. Due to having 11 players, there was a bye each round, and we’d planned an all-play all system (time allowing). Mike Ward dusted off his archaic tape recorder and slotted in his trusty C-60 (people under the age of 30 will have no-idea what I’m talking about here..) and the buzzing was under way.

Rounds were played pretty quickly and its fair to say most games were fun and blunder-filled. Towards the end of the evening, it was clear we wouldn’t have enough time to complete a full all-play-all, and two rounds were left out.

Most games went according to expectations and grade, but a few unexpected results were John Anderson beating Jerry, Vic and MikeW managing to hold off Mike Richardt for the 36 moves (something Nick failed to do), and Nick beating Ben. Apologies if I missed any others of note.

The final top three scores on the night were –

A play-off was considered, but due to time constraints Nick and Mike agreed to share the title.

STOP PRESS!!!
The following morning, while authoring this report, I tried to recreate the score cards of the top three, and it seems there is a mistake in Nick’s scorecard – he’d been awarded 3 points for his win over Ben, but it wasn’t within the 36 moves, and therefore should only be 2, thus taking his score to 20, and meaning Mike is the overall winner.

Any many thanks to all those who came along to make this event work. Plans are already underway for next year’s event..