Last Sunday was the last tournament in the Somerset Junior Chess Grand Prix in Bath .  Frank was unable to attend so Nathanael was on his own this time.

His first opponent was a regularly known u12 player who has recently been selected for the England team and had a grade of 123. 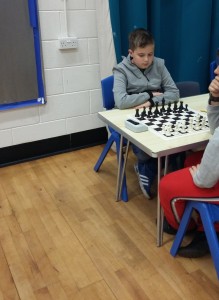 Nathanael went in with a positive attitude as they had had some good games in the past.  With 25 minutes each on the clock the game went to the full 50 minutes.  Unfortunately Nathanael ran out of time with his opponent having 23 seconds remaining.   A game I think he can be proud of.

Next came an u11 player who was currently second in the league table, Nathanael had an easy win in 5 minutes. Third was another u11 contender for the top four spots in the league final and Nathanael played well winning in 10 minutes.  His fourth and fifth opponents were back with tough u12’s who beat Nathanael quite quickly.  Then he ended the 6th game with a stale mate.  He ended the tournament with 2.5 points, so no award this time.

But all is not lost, we can “CELEBRATE” because both Frank and Nathanael have gained 1 of the 4 places in their age group in the grand final on the 17th June 2018 at Millfield School.  Well done boys!!

One thought on “Junior Members Through to the Finals”