Another month and another Somerset Junior Chess Grand Prix for Frank and Nathanael is quickly upon us.  For those of you with a keen eye might have noticed that the last Grand Prix was #3 and now this is #5.  #4 was unfortunately cancelled in January.

This time we were a little further afield in Frome.  On paper it doesn’t seem to be too far away, but on wheels it seems a very different experience and wondered if we would ever get there as it seemed to take an age to drive there.  This is what we call the biggy tournament out of the 6 monthly tournaments.  The school there has a flourishing chess club so there were many participants.

We tried a new approach to get a quick match re-cap after each game so roving reporter ‘Mum’ recorded a rundown on her phone from Frank and Nathanael after each game (I think parents were wondering who the stars were to have the privilege of an interview !!). 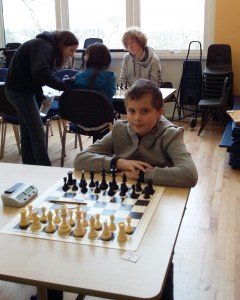 Round 1:
Frank – an equal game until he got to the end, had a slight winning position with a few pawns up and a King and Rook end game, then he lost on time!!!!!!  Arrggghhh !!!!!
Nathanael – Opponent got a fork and took Nathanael’s bishop.  At the end of the game he had a King, Knight and some Ppawns and Nathanael only had a King and Pawns, then his opponent managed to trap him and then got a Queen.  Check Mate!

Round 2:
Frank – Fairly messy game but managed to get an exchange at the end and get a ‘cheeky’ check mate.
Nathanael – It was an equal game with a rook up but then his opponent managed to get a Queen and kept checking him.

Round 4:
Frank – A bye !
Nathanael – Opponent had a Rook and Nathanael had a Bishop and his opponent managed to get a Queen and just kept checking and taking the rest of his pieces.

Round 5:
Frank – He was up a Bishop and it was a Queen and Bishop v a Queen and his opponent kept checking eventually capturing his Bishop.  They then agreed on a draw.
Nathanael – Another easy game and won fairly quickly.

Round 6:
Nathanael – A trickier game than the last two games.  He attacked and trapped his opponents King with his Queen and Bishop.

Frank only had 5 rounds to play so the U16’s presentation happened in the reception area during Round 6.  There was a clear winner with 5 points who had won every game.  Frank unfortunately lost to her on time in the first round, if he had won that game we could have seen Frank coming home with the winners trophy but we can’t dwell on the ‘what if’s’.  Frank can still be proud with his performance and came away with a runner up prize with 3½ points.  Nathanael came away with 3 points.  It was quite close on the results with 2 joint winners at 3½ points and then 5 players on 3 points.  Unfortunately you have to gain 3½ points to qualify for a medal and so he came away with nothing but with his head held high! 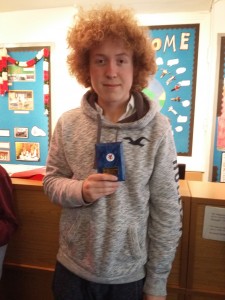 The last Somerset Junior Chess Grand Prix tournament will be a little closer to home in Bishops Lydeard on Sunday, 15th April 2018.

Then 4 players in each age group with the highest points totals will be invited to a finals day in June.  On the finals day, 1st will play 4th, and 2nd will play 3rd in a best of 3.  The winners of each of these matches will play a best of 3 matches Grand Final to decide the overall age group winner.

At the moment Frank is top of the U16 league table and Nathanael is currently 3rd in the U11’s but all could change in the last tournament as there are some strong contenders.  (See League Table)