Last Sunday when all the country were either out making snowmen or staying bundled up in the warm, Frank and Nathanael ventured through the blustery gales to High Ham, Langport for their next tournament in the Junior Grand Prix.  Frank only had 5 entrants in his age group and Nathanael had 14.

Round 1 – Frank was set for a bye on his first round then it seemed only 2 had turned up for his age group.  Things were shuffled around and he ended up with a game.  He looked set to win then the dreaded time on the clock let him down and he lost on time.  Nathanael was up against a player who has just been selected for the England Squad but he knew he had given him a good game before so went in positive.  He held him off for about 25 minutes and was a close game not on pieces but on position.  Early on his opponent took a knight but Nathanael was able to nearly check mate by lining up the bishop and queen.  Unfortunately his opponent  kept attacking his queen not allowing him to line it up and he lost the game.

Round 2 – 2 other players had now turned up for Frank’s group and he won his game.  Nathanael up against an U12 player who actually won the U12 group so his loss didn’t hurt so much as he held him off for 20 minutes.

Round 3 – Frank now on the last opponent of his group won the match easily.  Nathanael had a good game and won easily with lots of easy takes of unprotected pieces.

Round 4 – Frank now in the position of having played everyone it was time to play everyone again!  Next he was up against his opponent from the 1st round and he was determined to not loose on time this time round.  He needed a win to keep in the running for first and successfully won his game.  Nathanael had an easier game and managed to get a fork with his Queen against the Bishop.  His opponent moved the bishop and didn’t realise the Queen was open to being attacked, another win.

Round 5 – Frank a very quick win.  Nathanael’s opponent got a draw against Nathanael first opponent so he knew it was going to be a tight match, but unfortunately it ended in a loss.

Round 6 – Frank has his last win and Nathanael won an easy game taking the Queen at the start. 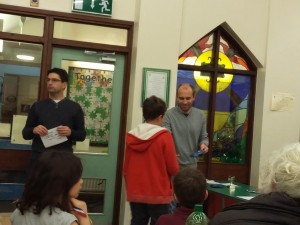 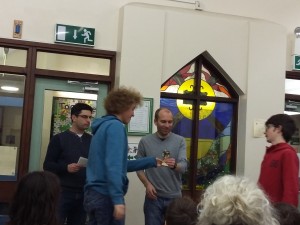 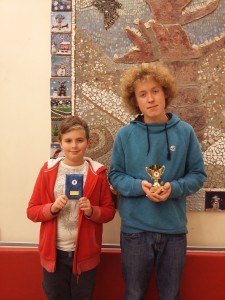