I’m not sure how many here are familiar with the phrase first world problems and the subsequent funny, yet embarrassingly trivial problems people come up with/suffer from – e.g. “Oh dear, Waitrose is out of organic humous, I’ll have to make do with their own-brand value range.”. A classic first world problem.

Pawnstar doesn’t shop at Waitrose (although he probably would if there were one in Taunton), and so doesn’t have that particular first world problem. However, one, amongst the many he does suffer from is people who have telephone answer phone messages that chirpily say “Hello….?”, exactly as though a person had answered the phone,followed by a significant pause, and then just as you start talking, the machine then says “Ha! I’m not here, please leave a message? (Yes, f**k you and you stupid answer phone…).

I can now officially add one more item to my list of first world problems, one probably only shared by 10 people in total in the entire universe!

I’m sure everyone can relate however – imagine talking to some strangers in a pub and opening with this – “You know where you are playing in an annual lightning chess tournament held at a small West Country chess club, and you are waiting for the buzzer to sound so you can make your move, and the buzzer does sound and you make your move, only do be told whilst making your move that the buzzer you just heard wasn’t the actual buzzer but an example of what the buzzer does sound like? Arrgh so frustrating and annoying, wouldn’t you all agree?” Terrible first world problem, huh?

Let me move on – Taunton’s 2015 lightning tournament was held at the club last night (Nov 3rd). MikeW was organising it as usual and did a very good job.

The format, as it has been for decades, is an all-play-all round robin type thingy, but the games are limited to 35 moves for each player, with a buzzer sounding every ten seconds, forcing a player to move then. If the game is unfinished at 35 moves, it is adjudicated. Points are awarded – 3 for a checkmate within 35 moves, 2 for an adjudicated win, 1 for a draw and 0 for a loss.

Other rules include a 3 point win if an illegal move is made and no resigning allowed (part of getting the full 3 points is to ensure a checkmate within 35 moves). You are supposed to move immediately after the buzzer or face a 3 point loss too. Nick probably racked up about 30 points in his game against Mike Watson due to flagrant breaches of the illegal/immediate move rules…! (but in a travesty was only awarded 3 – yes a first world problem for him!)

The ‘buzzer’ is actually a cassette recording played on a mini boom-box that MikeW brought along. For those under 35, let me explain –

cassette – a ​flat ​rectangular ​device ​containing a very ​long ​strip of magnetic ​material that is used to ​record ​sound and/or ​pictures, or a ​machine that uses such ​devices.

Many years ago, MikeW patiently recorded this cassette to be used as the buzzer for the lightning tournament – presumably he sat in a quiet room pressing a buzzer every ten seconds whilst recording it.. Were Sherlock Holmes to attempt to date and method the recording he’d notice the absence of any Dolby B or C (its very hissy), its old (can you even buy cassettes anymore?) and its been used a lot (quite muffled and quiet). So all this would point to maybe late 1980’s, but in a sudden, dramatic development, around move 20 or so, you can clearly hear the de-dela-de,dela,de,dela,de of a mid 1990s mobile phone signal interfering with the device. So looks like its about 20 years old…

And yes, the tape has an ‘example’ buzz at the start, before the actual first buzz, and yes, even after 20 years this still catches everyone out. Even after ten games on the same evening, people got caught out. Who said chess players are intelligent?

Ok, on to the chess – being a lightning tournament, no games were recorded. Most went according to form, and with a few rounds left, Nick, leading by 1 point, was due to play Mike. After 35 moves, the game was unfinished. Nick was a deliberate exchange down, given to achieve some initiative and a strong bishop. but Mike had defended well. How to adjudicate this? Mike was material up but not won yet due to the early nature of the game and also due to the slightly better activity Nick had. Sportingly he agreed to a draw, which almost certainly handed the title to Nick (Nick says thanks, btw..). Just to balance things out, Nick was awarded a draw in a round when he was a Q+B v Q pawn ending, so there is an element of karma there.

Anyway, in the end, Nick was the winner by one point, Mike second and James third – both Mike and James have been historical winners prior, with James being the current holder. It was a fun evening, as always, and long may it continue – thanks again to MikeW for running it and putting up with all the groans/complaints as everyone moved after the ‘example’ buzz.

With a new winner, this meant the passing of the baton (trophy) from James to Nick, and Nick, being the true gent said to James – “Oi! Its my trophy – hand it over. Now!”

But there was further controversy – James didn’t have the trophy, nor had he ever had it during his reign.

So where is it?

Terry was the previous winner, and since being handed the trophy two years ago, he has mysteriously disappeared…?

UPDATE #1 – Terry has been in touch – he doesn’t have the trophy, nor did he ever have it. So the prior two winners have been trophy-less..

UPDATE #2 – Miraculously, the trophy has been found, safe and well. I’ll spare the embarrassment of the person who spotted it lurking on a shelf along with some other junk, but suffice to say, the trophy is safe – here is a picture of Nick, re-united with the trophy.. 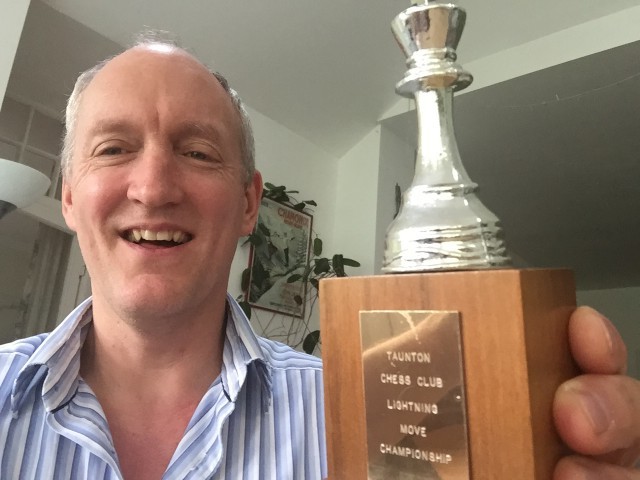