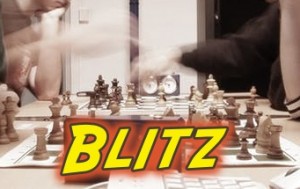 If any of you are interested, Wellington Chess Club are holding a Blitz Tournament on Wednesday 1st August 2018 at 19:30 (sharp!)

This is the third year that Wellington have hosted this competition, and last year’s winner Chris McKinley from the Sedgemoor club is expected to attempt to retain the trophy which he won narrowly last season.

Wellington are hoping to attract other contestants from Sedgemoor and Taunton club. Each contestant will play five matches with ten minutes allowed for each player to complete all his moves and as the evening progresses those with most wins will be matched against each other. Wellington’s Alex Conway, Jon Duckham and Simon Pickard will be expected to be in contention for the home team.

Chris McKinley will be  sure to make a strong defence of his trophy but everybody will need to be wary of Sedgemoor’s Lander Arrasate who had such a fine season last year leading Wellington’s Division 1 team and will be a formidable opponent for anybody aiming to win the trophy.

Hope to see you there.

14th April 2018 – 6 round swiss rapidplay tournament with 30 minutes each, graded section for players graded 140 and under.  Details & entry form can be found here or at https://www.teignmouthchessclub.com under the rapidplay menu.

15th April 2018 – The tournament has been moved from Bishops Lydeard to Combe Down, Bath. Details will be sent out to the junior members once they have be posted here.

Further details can be found at http://somersetchesscongress.webs.com and special deals are available if you would like to stay overnight.

Entry form can be downloaded here

We have had an invite from the West Wales Chess League to attend their annual open congress in Swansea on the 17th – 19th November. This year is a special one as it is the 50th occasion the congress has been held. If you would like to take part you can find all the information, along with the entry form here:  West Wales Entry Form 2017

An invite has been sent to us for the upcoming 2020 Chess Midlands Qualifier, taking place at Birmingham University on Sunday 22nd October. For more details see http://2020chess.com/fixtures.html

There have already been entries from half a dozen sides along with interest from dozens more, so its all set to be a very exciting event! You can also find details of previous tournaments they have run, including the one last year in the midlands.

Basically you just need any four players to make up a team of your choice, its a 5 round team rapid-play at just £5 for students/under 18 and £10 per adult, with plenty of prizes up for grabs.

If you are interested or have any questions please let them know.  Entries are online via the above link.

Round two finished with the following results –