The 2017 AGM was held recently. Details below –

Division trophies: Taunton did not win any division competition in the 2016/17 season.

Mike Ward gave gloomy report – essentially club had income of £647.64 against expenses of £1,067.26. This has resulted in a near zero account balance. The bulk of the extra expense has been due to the costs of our new venue. There was broad acceptance that the new venue is worth the cost and therefore club membership costs would have to raise to allow the club to continue. This issue had been raised prior to the AGM, an a figure of £50 had been suggested. However, on considering the lower number of likely paying members, it was calculated a figure of £60 needs to be applied. There was near unanimous acceptance of this. A couple of caveats were also proposed, these being that any new members starting part-way through the season should pay a pre-rata rate – e.g if they joined half season, then only £30 would apply. Also, the club has a number of ‘occasional’ members – it was decided they should pay £2 per night to contribute, although this would be waived for the very first visit for new members to the club.

Taunton finished 2nd, some way behind winners Yeovil. Big thanks to Martin and Alex for taking over partway through the season and making this happen. However, there were a large number of defaulted matches (roughly 50% were defaulted). It became clear due to player availability and members leaving, the club cannot support a future Division 1 team. Therefore Taunton will withdraw from Division 1 for the next season. This issue had been discussed prior to the AGM and Alex Conway has formally invited any Taunton player wishing to play in Division 1 matches can join the Wellington team. As a club, we support this. Any Taunton player who does play for the Wellington Div1 team can still play in the other divisions for Taunton (so long as they qualify).

Taunton finished bottom – again player availability meant either matches were defaulted or much weakened teams used. Martin Worrall tried to hold it all together but had the same issues as faced by the Div1 team. Looking towards next season, it was also decided that Taunton cannot support a Division 2 team, and so will withdraw for the 2017/8 season.

Martyn captained the Division 3 team. They ultimately finished 5th in a closely fought league. Matt Haines was the player of the season. Martyn will continue as captain for the next season.

Mike Ward captained here, and they finished bottom of the league. Mike was also the top rated player, performance-wise. However, Mike is stepping down as captain, and David Graham will take over for next season.

There were no official friendly matches this season to report on.

Taunton lost in round 1 to Yeovil, scoring 3.5 : 5.5, with James being the only player to win a game – Nick, Mike and Martin drawing theirs.

Trowbridge were the Cup winners, beating Glastonbury 4.5 : 3.5 in the Final.

Due to Taunton not entering a Div1 or Div2 team for next season, we will also withdraw from the Somerset Cub

Matt Haines won this, which was arranged by MikeW. Many thanks to all for keeping this working so well.

J: Club Webmaster; Nick Wilson to continue, but Sharon, and all club captains to be given access and training so match reports and news can be added.

Tonight was the first club night at our new venue.

Most nights we are in the hall, which is to the right as you enter the church. But do note on the first Tues of every month we will be in the identical, but kitchen-appliance-challenged left-hand hall due to an earlier booking. I assume once the bookings team understand it is the Taunton Supreme Team of Chess Playing Gods in residence, they will bow before our chess-prowess and let us have the same hall each night, maybe. Or maybe not.

Plenty of space and light inside, with good sized table and comfy chairs. 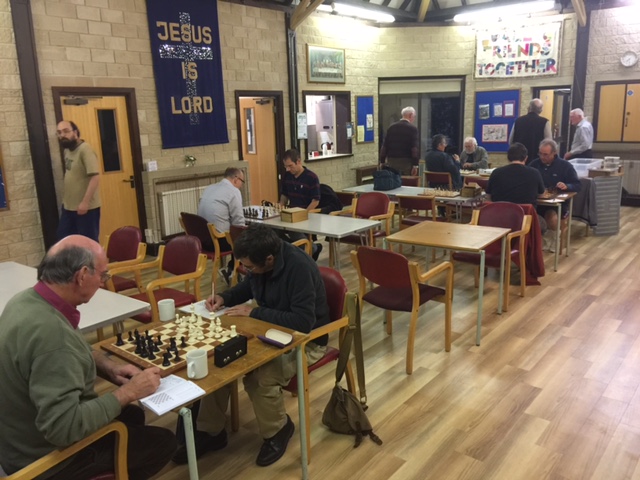 Fully kitted out kitchen – including ovens just out of shot! 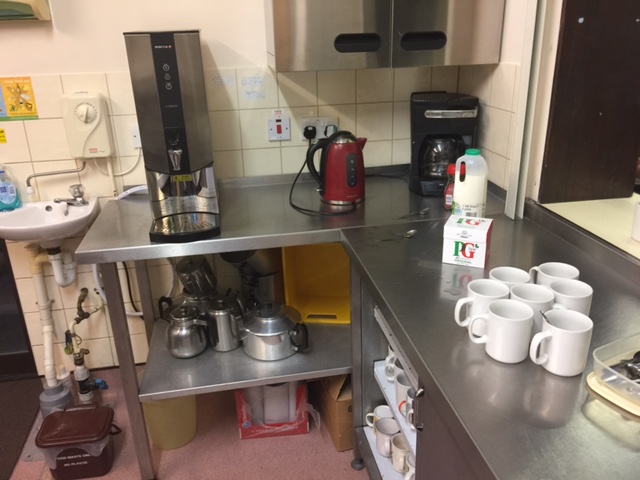 Games got underway, mainly friendlies, and the first to finish was a nice smothered mate delivered by Steve Smith. 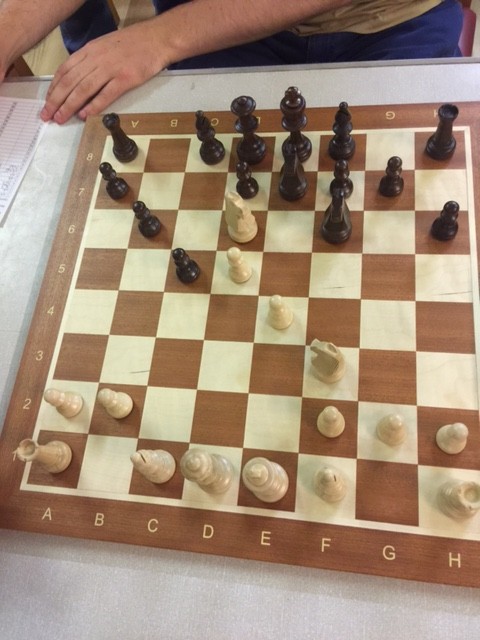 So the new venue looks good. May we crush all opposition there and grab lots more titles etc..

Yes, the 2016 season is underway, and looking forward to meeting and playing with you all.

Key points to know are –
* New venue (St Michael’s Church)
* All fixtures published (Div1 Div2 Div3 SomCup)
* Membership now costs £30 (can be split into 2 x £15 half yearly)
* Lovely new wooden match sets bought (and extra special ‘Board 1′ set)
* In addition to league fixtures, the revival of Isles Cup. This is Taunton v Exeter and is due to be played on Sat 8th Oct.

Taunton Chess Club has moved! Our new venue is-

See here for a map.

Obviously sad to be leaving Monkton Heathfield, and many thanks to them for letting us use their room for so long.

But looking forward to playing at our new venue!

As readers will know, the TSToCPG has recently seen a gradual departure of several Gods and might soon need to be renamed TSToCPGaDG as DemiGods step up to fill the vacated places. Of course with all the Gods leaving, this has impacted on our strength/invincibility and other teams no longer cower and tremble in our presence and instead start to harbour thoughts of rebellion, actually believing they may even have a chance of taking us on. The sad fact is, there is truth in that we are no longer what we once were. We know it and they know it.

Which makes it remarkable we made it through to the Somerset Cup Final (yay!)

This was supposed to have taken place last month against Weston-Super-Mare but they fecklessly didn’t turn up as their ringers from various other teams were too lazy to make the effort to travel to the final, thus meaning the team withdrew at the last minute.

Sounds harsh? Well the powers-that-be agreed and issued a statement saying WSM had now ‘withdrawn’ from the Somerset Cup and all their prior games were cancelled/annulled. Hmm… ‘withdrawn’? – sounds more more like ‘disqualified’.

Anyway, this meant both Yeovil and Sedgemoor who had previously lost to the ‘WSM’ team <cough>,  would now player each other, with the winner taking on Taunton. But Sedgemoor couldn’t manage it, so the new final would be Taunton v Yeovil, sometime in May.

Andrew Footner phoned Nick to arrange a date, explaining he would be away between certain dates and ideally he’d like a fixture when he returned. Quite why Nick ignored this Goose laying a Golden Egg is beyond me – he should have jumped at the chance to arrange a date when Footner was away, but he instead, very sportingly, and very un-TSToCPGly, agreed a date of May 17th.

As MikeR has now left the country for his new job, Nick took over to arrange a team – not so easy as MikeR, DaveL, TerryS and BenE are no longer available. Our top players are now MarkH, JamesB, NickW, AlexC, MartinW, JerryK, NigelC and StanW. They were all asked, and all could make it – phew.

This did mean we didn’t have our MikeW board 8 secret weapon, but we’ve survived without his unique skills before and we hoped to do again this time.

May 17th came around and Yeovil turned up with what looked like their best team. I should point out that there technically was a coin toss, presumably for the theatrics, because, as always, Nick was white and everyone else settled in around that.

The games got underway and finished roughly in this order –

Board Eight – S Gray 0.5  v Stan Wojcik 0.5
No game record here but I vaguely recall Stan was either an exchange up or down, but neither side had enough for a result and was thus drawn.

I think Alex was next –

Board Four – D Freeman 0.5 v Alex Conway 0.5
Alex refused to hand over his scoresheet, saying the game is not worthy of publication it was so dull. Basically, 1. e4, then some stuff, then a draw. Yawn.

Next could well have been Jerry –

Board Six – Jim Fewkes 0.5 v Jerry Kilby 0.5
Jim is a tough player to beat but Jerry can also play above his grade, so whilst this could have been a decisive game, it wasn’t. Jerry gives the first 20 moves here – he won the exchange, but Jim’s bishops and pawn mass meant he couldn’t press for a win and the draw was drawn after 43 moves…

I think James was next –

Board Two – Andrew Footner 0.5 v James Byrne 0.5
Andrew played an aggressive opening. James was on the back foot, but never in any real trouble. Eventually the game petered out into a draw. Game notes supplied by James – thanks!

Board Three – Nick Wilson 0 v F Felice 1
Nick, clearly being influenced by the draw-fest going on around him, played the most boring game ever, and by move 28 the position was dead-drawn. A draw was offered, but rejected by Black, clearly sensing Nick’s lack of interest in the position. It was the smartest move by Black all night, as Nick soporifically drifted from even, to slightly worse, to worse, to much worse, to lost. Appalling, shameful play by Nick. All Black had to do was turn up and bore Nick into losing. Yawns and self-loathing abound.

So Yeovil take the lead, now being one point ahead, with just 3 games to play. But glancing around at the remaining games, it looked like Taunton had good chances in them all, particularly Martin, who looked like he was about to be a Queen up, only to sensationally agree a draw at that point!

Board Five – Martin Worral 0.5 v Roger Knight 0.5
These two have a long history of wildish exciting games followed by frantic time trouble and/or terrible blunders. We got the first part of the usual formula tonight and just as the second part was about to unfold, they sheepishly agreed a draw!

So Yeovil still lead by 1 point and just two games left, Nigel and Mark. Nigel looked like clearly winning and Mark less so. Of course should Nigel win and Mark draw, then scores would be level. But then the board score would come into play and we’d lose overall – why oh why didn’t we play MikeW as our secret board 8 weapon!! Would this omission come to haunt us??

So Taunton level the scores, with just Mark’s game to play – but this is a must-win game, or we lose due to count-back!

Board One – Mark Hassall 1 v A Batson 0
I don’t have the moves, but by the end-game Mark was material up and had a strong passed pawn. While forcing Black to defend that, White made progress on the other side of the board, forcing the win.

So Taunton clinch the win with a final 4.5 v 3.5 score. Very close match and commiserations to Yeovil.

But congratulations to us – Somerset Cup Champions again!! 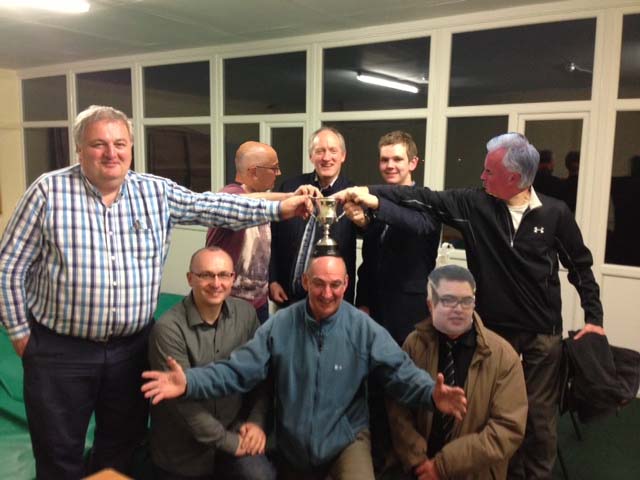 Well played to all – celebrations will be at our annual Chess BBQ to be held at Nick’s sometime in late August – date to be confirmed!!